The Japanese epic story telling tradition of Heike Monogatari, as I believe, perfectly reflects our modern world with its dramatic episodes of universal human emotion and its Buddhistic idea of cause and effect and human life's impermanence. It is my sincere passion to perform this traditional music for a contemporary audience, sharing a space and time to discover an essence of humanity.

A musical performance of Junko Ueda extends Japanese ancient sound into modern times. Both the biwa epic story telling tradition as well as shomyo Buddhist chant are unique musical treasures which have been passed on from generation to generation.

Since 1995, Ueda has been presenting the shomyo chant workshop and lecture. In these events, participants enjoy exploring the 1200 year old shomyo melodies and its concept and seek the wisdom and power of the breath from this ancient tradition. 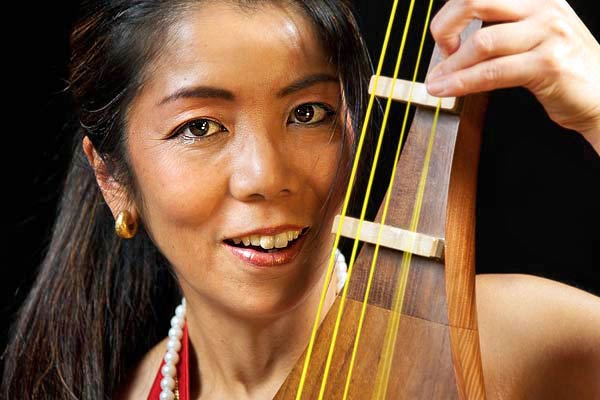 Contributing for new compositions and improvisation, Junko Ueda has been working with composers, e.g. Jean-Claude Eloy, Qu Xiaosong, Akemi Naito, Keiko Harada, Daryl Jamieson and performing with e.g. cellist Yo-Yo Ma, contrabassist Peter Kowald, Dutch Nieuw Ensemble, percussionists Ying-Hsueh Chen and Lê Quan Ninh. Also, she is specialized to perform the pieces for biwa of Japanese composer Tôru Takemitsu. Since 1988 she has been presenting a duo performance with Dutch flutist Wil Offermans. This Duo Ueda Offermans has recorded the CD "How to Survive in Paradise" (CD732 VDE-Gallo Swiss) and has been touring world-wide (Europe, Asia, North and South America), performing own compositions and improvisations. She has been active as a producer for several inter-cultural projects including 12xHolland and Body & Soul Xperience Caravan. 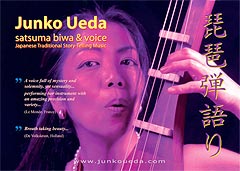